From Dollywood to Hollywood 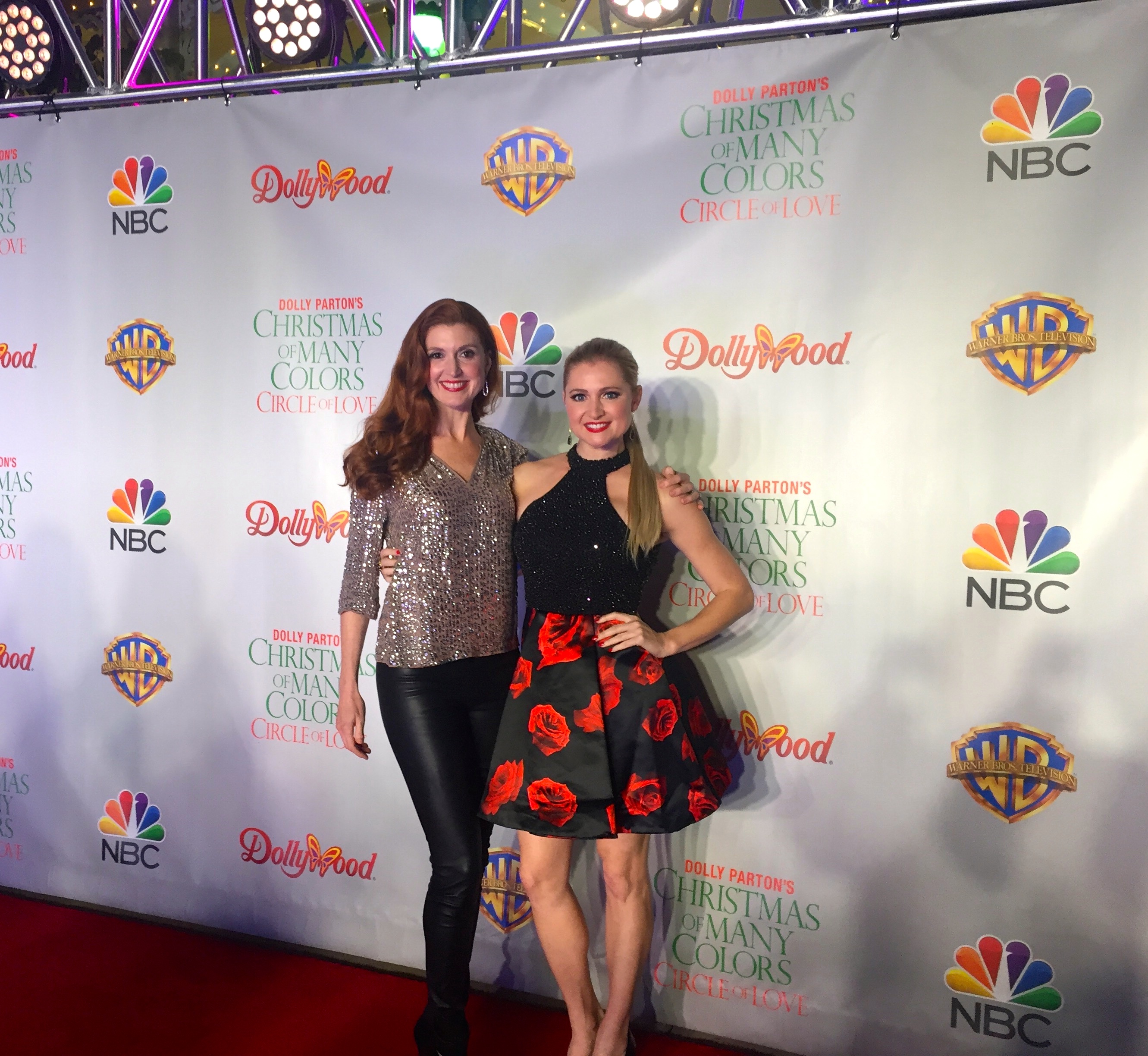 I was heartbroken to hear about the horrible fires in the Great Smokey Mountains. That region of the country holds a dear place in my heart as I have spent a lot of time in both Gatlinburg and Pigeon Forge. My thoughts and prayers are with the folks of that region at this most difficult time. But since I am in the business of humor, I will proceed with a fun story despite my heavy heart.

Last Tuesday I headed to Dollywood Theme Park in Pigeon Forge, TN for the premiere of Dolly Parton’s new NBC movie, “Christmas Of Many Colors.” My dear friend, and fellow Southern Women Channel actress, Katherine Bailess, attended the event as well and as we were driving to Pigeon Forge she turned to me and said, “I’ve never been to Dollywood, have you?” Well, y’all, I almost fell out laughing. “Have I ever been to Dollywood? Only forty-eleven times! Come to think of it….Dollywood is where my illustrious show business career began.”

Ya see…I grew up clogging. My Mama was a clogger and she taught me to clog before I could even read. Mama kept the roads hot hauling me to all the best clogging teachers in the Southeast to make certain my skills were up to snuff. I spent my childhood clogging at talent shows, church socials, pageants, clogging competitions, malls and nursing homes. By the way, I realized when I was performing in the Hollywood Bowl’s 2012 production of “The Producers” that all that clogging at nursing homes taught me the essential skill of how to dance in taps on a slick surface. As I explained to my fellow “Producers” cast members who were concerned about the stage surface, “You just spray those taps with hairspray till they’re sticky as all get out and if that don’t work then you throw some duct tape on the bottom of the taps.” Let’s be real…duct tape and hairspray solve a lot of Southern women’s problems. But I digress. Back to Dollywood.

I grew up participating in clogging competitions at Dollywood and I loved it. As a kid, I always knew I wanted to be in the entertainment business, although at the time I had zero plan for attaining that goal. But I was always incredibly inspired by Dolly. If she could emerge from her humble background and become a huge entertainment legend then surely I could too. Didn’t occur to me that she has more talent in her pinky finger than I have in my whole body…mere details, y’all…mere details.  But one day when I was in high school the most exciting thing happened…my clogging team got invited to perform at Dollywood. I ‘bout died! I mean this was my first official “gig” as a performer. This was my moment! I remember being happier than a pig in slop as I tore up that barnyard theater stage in my homemade, unfortunate looking clogging costume. But at the time I thought I looked pretty darn cute and I soaked up that applause as if I were a big star like Dolly.  I just love the fact that is was good ole’ Dollywood that first validated my ambition to be a professional performer.

So needless to say, I found myself a lil’ bit emotional last week as I was getting all gussied up to attend Dolly’s movie premiere.  Her movie is called, “Christmas of Many Colors…Circle of Love” and I couldn’t help feeling like my own life had come full circle. While I am grateful for all the wonderful jobs I have booked in my career, Hollywood is tough and I have struggled for years as an actor and writer trying to get that one life changing big break.  In fact, at the time I started the Youtube “Southern Women Channel” I was at my wits end dealing with the insanity that defines Hollywood. I was sick of being told “no no no…you and your ideas are too Southern.” Well…the most motivating word for a Southern woman is, “no.” So I instead of sulking, I made my first video in an attempt to prove Hollywood wrong, cure my homesickness and cheer myself up. And lo and behold people watched it. Millions watched. I was floored. I was and continue to be blown away by the outpouring of support the Youtube channel gets from fans. I never dreamed my little Youtube channel would lead to the opportunity to meet Dolly in person and pitch her some ideas as a writer. And I certainly did not foresee representing the Southern Women Channel at a fancy movie premiere for Dolly Parton at Dollywood. Do what?!?

As I was getting ready for the big event, I totally panicked upon realizing that my hair did not take to my hot rollers. It was flat as a flitter!  REALLY? WHY? WHY NOW?  I mean you gotta have proper big hair for a Dolly Parton party!  I scrambled around in a fury trying to rescue my hair with not one, but two curling irons as my buddy Kat, worked her faux hairpiece into perfection in five easy minutes.  Kat gently reminded me, “Hun…this is why Dolly wears wigs.”   My stupid hair put me way behind schedule so I ran out of time to paint my nails…my Mama would not approve…nothing tackier. Then on top of that my shoes were brand new and it dawned on me I forgot to pack Band-Aids. Rookie mistake. Plus on top of that I have a hip injury and I’m not even supposed to be wearing high heels. I began to worry, “What if my hip gives out and I bust my ass right in front of Dolly, the Queen of the South!” Meanwhile, Kat, stunningly put together like a magnificent Southern belle, sat patiently and watched as I ran around the hotel room trying to pull myself together. Being a true friend, Kat merely thought, “Bless your heart”…but she didn’t actually say it out loud.

The truth is my hair was fine, I was just feeling nervous and insecure. Hollywood movie premieres are always filled with glamorous people that make ya feel like you’ve never accomplished anything. But then I suddenly remembered I wasn’t in Hollywood…I was in Dollywood! This is my stomping ground! This is the South! This is home sweet home! Dolly always preaches to “just be yourself” and she is a very wise Southern women. So I reminded myself that even though I may be considered “small taters” by Hollywood standards, I’ve come a long way on my blessed journey since that first gig clogging on that Dollywood barnyard stage.  So I took a deep breath, ignored the searing pain in my feet and hip, held my Southern head high and strolled down the red carpet…keeping in mind my favorite Dolly quote, “If you want the rainbow, you gotta put up with the rain.”

P.S. “Christmas of Many Colors” is a terrific movie! It’s heart-warming, fabulous family entertainment and I hope y’all will support Dolly and the talented cast & crew by watching. It aired on Wednesday, Nov. 30 on NBC but don’t worry if you missed it, NBC is going to air it again on Dec.23!